PFLAG’s meetings by Zoom increased attendance, are likely to stay after the pandemic 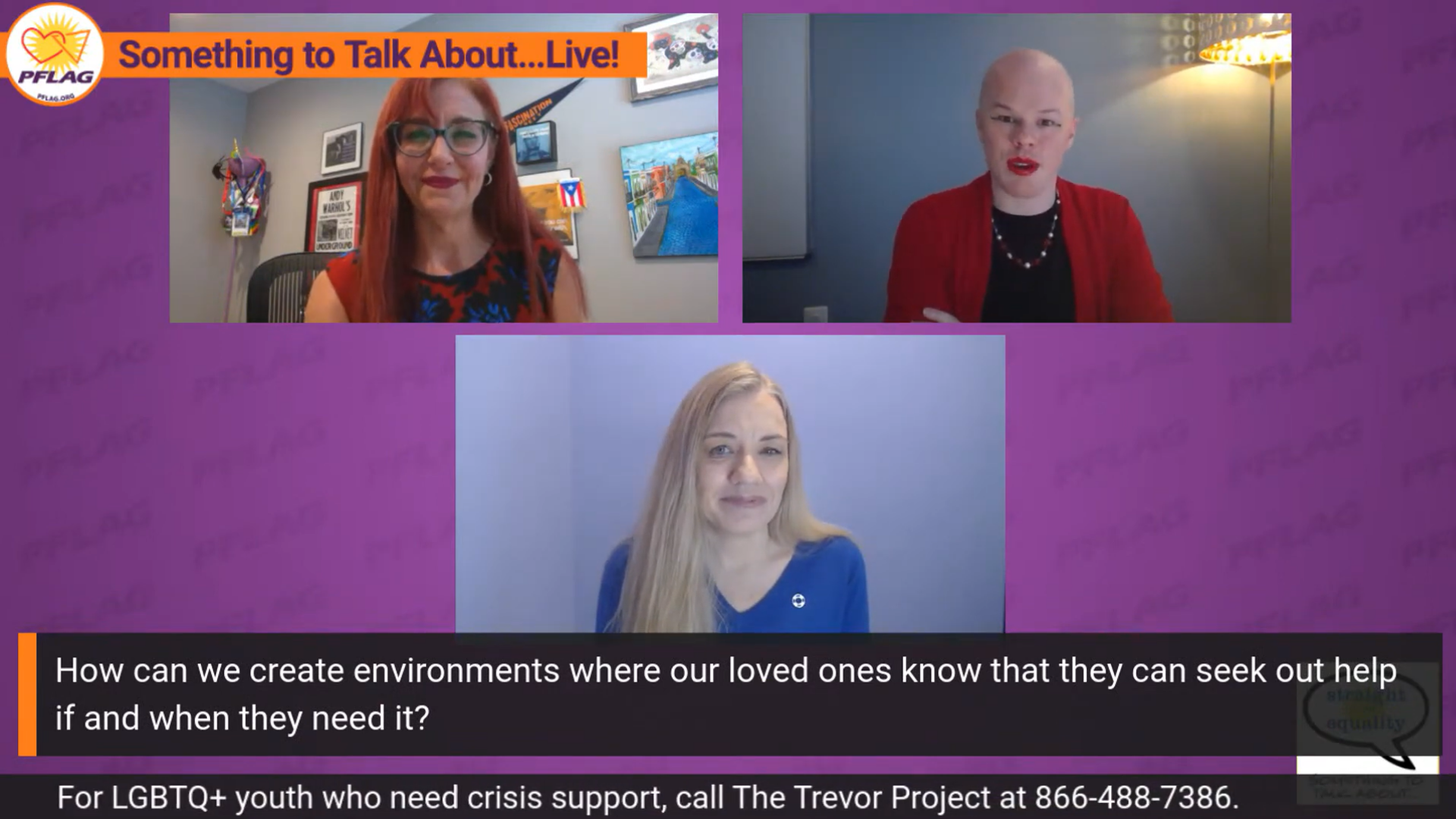 “Something to Talk About Live” on April 15, 2021 discussed mental health and talking about suicide. Clockwise from top left, Jean-Marie Navetta, Director of Learning and Inclusion with PFLAG National; Sam Brinton, Vice President of Advocacy and Government Affairs with The Trevor Project; and Doreen Marshall, Vice President of Mission Engagement, with AFSPNational.

PFLAG, formerly known as Parents, Families, and Friends of Lesbians and Gays, had a long history of regular in-person meetings, so successfully that the national organization has also long boasted of more than 400 chapters and more than 200,000 members and supporters around the United States. But when the COVID-19 pandemic hit in March 2020, PFLAG needed to make a major change, and quickly.

The national PFLAG immediately, strongly recommended all chapters cancel its vital in-person meetings, used for members to support and educate each another on LGBTQ topics. The national organization then provided PFLAG Connects, an enterprise-level Zoom platform for use by all chapters. About 150 PFLAG chapters regularly use the platform, says Laura McGinnis, PFLAG’s media relations manager.

“The program was conceived, developed and launched in a matter of weeks,” she said. “Necessity was the mother of invention in that one.”

Jamie Curtis, PFLAG’s National Director of Chapter Engagement, says chapters that do not use the Zoom platform are still connecting in other ways. Some smaller chapters have partnered with others to help point people to PFLAG Connects meetings, if their own chapter is not holding them. Some are instead doing phone calls with people who need help in a one-on-one environment or are alternatively reaching out to people on social media.

The Connects program has also provided chapters with information on how to hold the virtual meeting, including the basics of the technology but also ways to make sure everyone feels comfortable to share in a virtual setting.

PFLAG in 2019 had 2019 revenue of over $2.5 million, which is used to complete the mission of building on a foundation of loving families united with LGBTQ+ people and allies who support one another, and for its members to educate themselves and their communities by speaking as advocates until all persons respect and affirm LGBTQ+ people.

“No matter where you are in that journey of acceptance, and affirmation, even if you are just sort of questioning, ‘how is it that I deal with all these questions?’ you are welcome at a PFLAG meeting,” McGinnis said.

So PFLAG had to figure out how Zoom could be used in the most personal and effective ways for it. Its Columbus, Ohio, chapter reports success with this socially distancing project. Since holding PFLAG Connects meetings starting in May 2020, the Columbus chapter says more parents are attending meetings virtually than usually did in person, including more couples and even entire families.

Jaron Terry, the Columbus chapter’s board president, often leads the meetings. Meetings are private, so pass codes are necessary to enter a Zoom waiting room. The online gatherings typically consist usually of all attendees introducing themselves, followed by a speaker and then a question-and-answer forum. All participants are asked to keep their cameras on during the meeting to increase participants’ comfort levels, and everyone must be called on or raise their hand before speaking to prevent interruptions, Terry said.

Curtis says the virtual meetings were already a thought before the pandemic as a way to involve more people in the organization. The pandemic just vastly sped up the project’s conception. PFLAG plans to continue the Connects program even after the pandemic is over, to accommodate people in remote areas without a chapter near them or anyone who would struggle to get to a meeting anytime they wanted to for any reason. The organization has recently brought on additional staff to continue PFLAG Connects and will soon roll out a survey to get a better understanding of how the chapters are using the program and how successful it has been.

“Something to Talk About Live” on Dec. 3, 2020 discussed the state of H.I.V. for World AIDS Day. Left to right,  Jean-Marie Navetta, Director of Learning and Inclusion with PFLAG National; Greg Millett, Vice President and Director of Public Policy with AmFAR.

Since the pandemic’s start, the national PFLAG has also switched its 30-minute live broadcast, Something to Talk About Live, to weekly from monthly. Broadcasts are devoted to discussions of LGBTQ topics in the news media and political issues such as the Equality Act, the recent Bostock v. Clayton County Supreme Court ruling, and the inclusion of trans people in the military.

McGinnis said that prior to the pandemic, the program was not as interactive as it is now—viewers now can submit questions and discussions proceed as public forums. The weekly broadcast is live at 4:30 p.m. EST on Thursdays on Facebook, and previous weeks’ recorded broadcasts also are available there.

Since PFLAG is still necessary, it is “fantastic” that the organization has chapters and members “all over the place,” McGinnis said. “I think something that the pandemic has made clear is that people need PFLAG, they are reaching out to us online, and even if there is not a chapter near you, you can connect with people.”

Since Joe Biden took office as president, the national PFLAG also has been actively working to support the Equality Act, which has been introduced as a bill in Congress. As the PFLAG website puts it, “In addition to adding protections based on sex, including sexual orientation and gender identity, to the 1964 Civil Rights Act, the Equality Act enumerates what ‘public accommodation’ includes and provides more protection from discrimination to more people in more places. This includes transportation, health care, banking, entertainment, legal services, accounting, shelters and food banks, gyms, travel agencies, salons, and even funeral services. The Equality Act also ensures that the U.S. Constitutionally protected right to freedom of religion is preserved.”