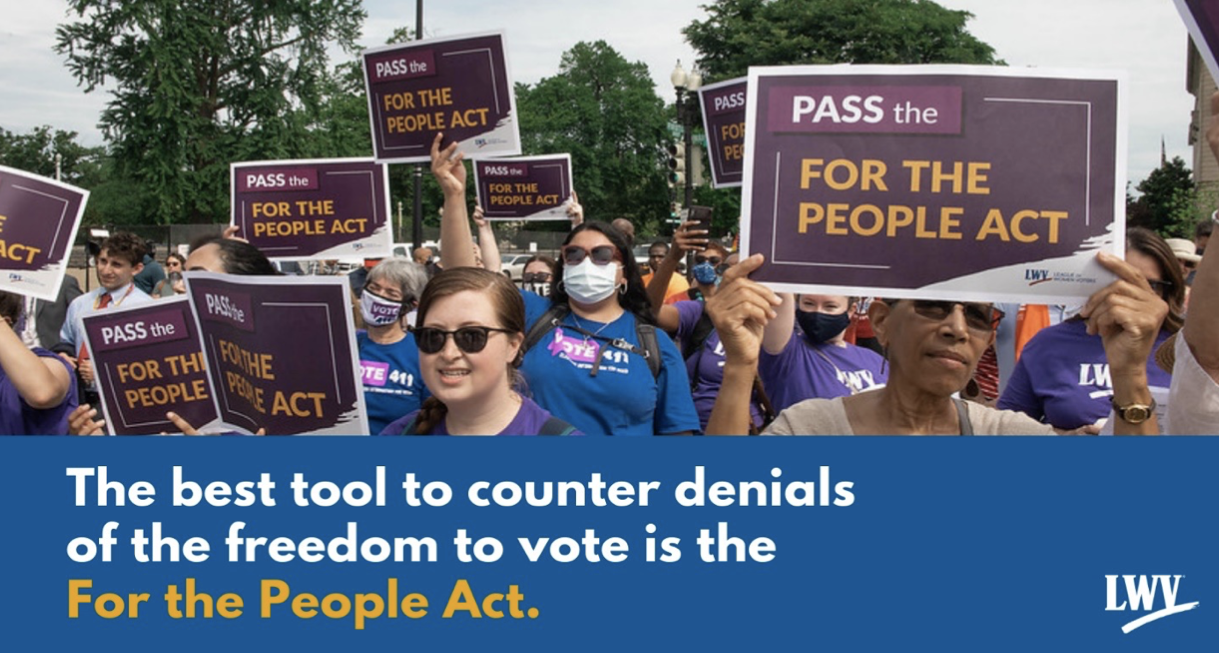 The League of Women Voters (LWV) has been working at both the national and local levels for months to help pass the Freedom to Vote Act, a new comprehensive revamp of the voting reforms that has been repeatedly delayed in Congress.

The bill, introduced in the US Senate on September 14, is designed to expand voting opportunities, modernize voter registration, and promote election security. The bill is supported by Senate Majority Leader Chuck Schumer (D-NY) and most, if not all, other Senate Democrats.

Key provisions of the bill include mandating that all states offer same-day voter registration, online voter registration, early voting, and mail voting periods. The bill also includes new ideas such as an election day holiday, protection for voters with disabilities, and election infrastructure improvements. The bill includes several important provisions from the For the People Act (last session’s H.R.1 in the House), which failed to to pass in the Senate.

The League of Women Voters in 2020 supported the For the People Act bill, which had many provisions similar to the current Freedom to Vote Act bill.

Virginia Kase Solomon, CEO of the League of Women Voters of the United States, said in a League press release last fall, “The League of women voters supports the freedom to vote act,” said Solomon. “This bill protects and expands the right to vote, decreases the influence of money in politics, and curbs partisan gerrymandering.”

She added, “The Freedom to Vote Act is the bill the American people want and need to make the promise of democracy real for us all. The League of Women Voters strongly urges every senator to support this bill.”

“We are proud to see same-day registration in the Freedom to Vote Act,” said Solomon. “It protects Americans who fall through the registration cracks and ensures that the largest number of Americans can exercise their constitutional right to vote.”

Meanwhile, at the local level, all or almost all LWV clubs around the nation have made their intentions clear by supporting the position of the national organization.

In the western half of Washington state, the League of Women Voters of Tacoma-Pierce County, Vice-President Noel Hagens summarized her organization’s support of the bill. “Voting rights is a primary concern of the League of Women Voters and based on the studies that the League (LWV) has done, I would say that all of the Women Leagues, including our League, would be strongly in for the freedom to vote act. It contains many measures that are important to us that we work on a local and state level.”

“Expanding the right for voter registration and the opportunity for people to vote, eliminating the influence of dark money has been a very important issue for us, therefore we strongly support this (the national League’s) decision,” she added.

Hagens reckons that this bill, if passed, potentially will turn out to be the most comprehensive democracy reform enacted in decades due to the inclusion of several new ideas such as the election day holiday and mandatory same-day voting registration in all 50 states.

“Well, such a huge overhaul (of the voting process) improves the security of our elections and builds confidence amongst the public,” said Hagens. “I think that it could really give lots of opportunities for people to register and will quite certainly improve the election voting percentage.”

She added, “I think that some people just become more interested at the last minute (to vote), and I think it’s important to be able to preserve it there. This bill will make that happen with the same-day voter registration.”

The League of Women Voters of Missouri, based in St. Louis, has emphasized that the Freedom to Vote Act “improves access to the ballot for Americans, advances commonsense election integrity reforms, and protects our democracy from emerging threats. This bill includes many provisions of the For the People Act (HR1/S1) but reflects feedback from state and local election officials to ensure that the people responsible for implementing these reforms are able to do so effectively.”

Maine’s League of Women Voters issued a statement after the bill was introduced in the US Senate, saying, in part, that it supports the “Freedom to Vote Act, a bill that protects and expands the right to vote, decreases the influence of money in politics, and curbs partisan gerrymandering. The Freedom to Vote protects and expands ballot access for millions of Americans, especially those who are often targeted by anti-voter laws, voters of color, voters with disabilities, formerly incarcerated voters, women voters, young voters, and elderly voters.”

The League of Women Voters in Marin County, in northern California, agreed with the national League and other local Leagues, saying the “Freedom to Vote (Act) will put power back into the hands of American voters by prioritizing voting access and participation while also modernizing future elections to ensure a system that everyone can trust. Contact your senators today and tell them to vote yes on the Freedom to Vote Act. Return control of our government back where it belongs – into the hands of the people.”