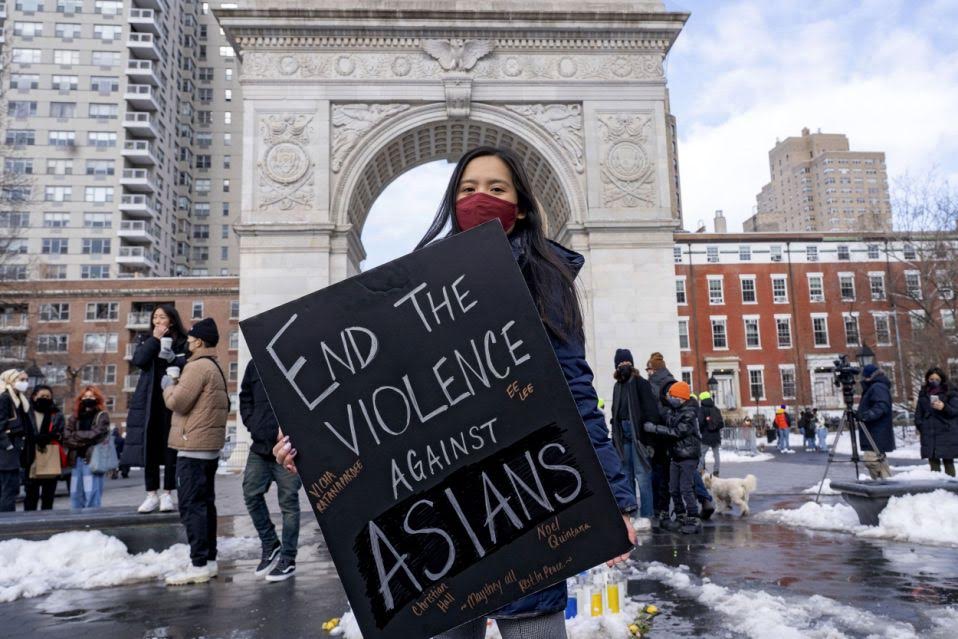 Protests against violence aimed at Asian-Americans and Asian immigrants are being held nationwide.

National nonprofit organizations for Asian Americans have quickly moved to add their voices and their resources to a growing fight among a broad cross-section of all Americans against violence against and other prejudice affecting Asian Americans.

A year ago, when the intensity of coronavirus grew, the World Health Organization (WHO) urged the entire world to avoid using phrases such as “Chinese virus” or “Wuhan virus” due to the potential backlash such language could cause for Asians and persons of Asian descent. But, on March 16, 2020, then-President Trump tweeted Chinese virus for the first but not the last time. The NYTimes said Trump first argued that these phrases are not racist or discriminatory because the virus came from China. However, about eight days later, Trump rescinded his statement and stopped linking the COVID-19 with China, at least for a while.

However, the damage was apparently done. The Washington Post has connected language and claims made by Trump to the exact result WHO had feared. Other news outlets such as CNN “determined that that name is both inaccurate and is considered stigmatizing.”

Flash forward a year, and on March 19, 2021, three days after Trump again tweeted “Chinese virus,” eight people were shot in various Atlanta spas, six of the victims being Asian or Asian-American women. Multiple reports tied the attack to racism despite initial denials from the Federal Bureau of Investigation.

Of course many have come together to #StopAsianHate, according to The New York Times, such as hundreds of activists gathering in Atlanta and marching from Woodruff Park in downtown Atlanta to the Georgia state capitol, where many more activists were waiting for them.

But in recent weeks, the Asian American Bar Association of New York, in cooperation with Paul, Weiss, Rifkind, Wharton & Garrison LLP—one of the nation’s most prestigious law firms—has published an indepth review of the increase of violence against Asian Americans since COVID-19. An extensive list of examples can be found throughout the 49-page report.

The Asian Pacific American Chamber of Commerce has issued a statement regarding Asian-targeted hate crimes and how they damage the Asian community as a whole.

“We believe it is important for everyone to consider the impact of their words and actions on the country’s estimated 21 million Asian American Pacific Islanders, and to not tolerate aggression in the workplace, or the public arena,” the statement reads. “Hate against some of us, harms all of us.”

In addition, they encourage those around them, like members, partners and sponsors to, “acknowledge, amplify, and denounce racism and the ongoing hate crimes targeting the Asian community,” the Asian Pacific American Chamber of Commerce said.

Asian-American organizations such as the South Asian Bar Association have allied themselves with Asian-American and Pacific Islander nonprofits to try to help.

The South Asian Bar Association’s president-elect, Samir Mehta, asserted that violence and prejudice against East Asian-Americans has broader affects and wider importance. “Most of the actions that have been unfortunately targeting the Asian American community but has not focused on the South Asian community, distressingly at the East Asian community, which is a group that we’re allied with and we care about.”

Mehta added, “Our biggest goal in all of this is to support our community, but to see ourselves in the context of what’s happening to other communities that we are going to be expanding our initiative and efforts to.”