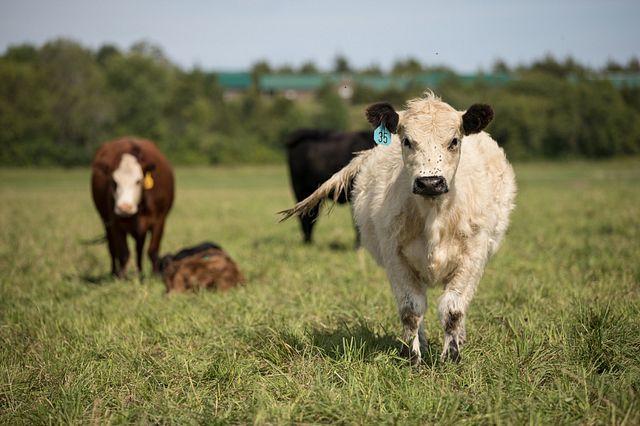 Courtesy of ASPCA. Farm animals that are Animal Welfare Approved

Not only has the COVID-19 pandemic brought attention to public health, but also to the inhumane treatment of animals due to factory farming. In a survey taken six months into the global COVID-19 pandemic, the American Society for the Prevention of Cruelty to Animals, or ASPCA, found that 89% of Americans are concerned by the impacts of industrial animal agriculture on poor animal welfare, worker safety and public health risks.

In factory farming conditions, chickens, pigs and cows are kept in overcrowded cages, undergo painful procedures and are regularly dosed with antibiotics to prevent disease outbreaks. At any moment, tens of thousands of animals suffer unnatural conditions in these industrial facilities.

Daisy Freund, the ASPCA’s vice president of farm animal welfare, said, “The problems with factory farming stem from the system’s single-minded focus on efficiency and ultimately profit, which is consistently at the expense of animals, workers, consumers, rural communities and the environment.”

With this in mind, the ASPCA is working to eradicate factory farming by helping consumers find food from higher welfare sources, partnering with companies to commit to better practices and asking lawmakers to ban inhumane factory farming practices.

Freund says animals almost no on-farm legal protections, but the ASPCA is working with local, state and federal lawmakers to change that. “We’re helping to pass state bans on some of the worst factory farming practices like cage-confinement, fighting for greater transparency in agriculture, advocating for government funding to support higher welfare farming, and working to strengthen existing laws so they keep farm animals safe from suffering.”

U.S. Sens. Cory Booker (D-NJ) and Elizabeth Warren (D-NJ) are among the prominent politicians against factory farming. In a statement supporting Sen. Booker’s bill to phase out factory farming by 2040, Warren said, “The COVID-19 crisis will make it easier for Big Ag to get even bigger, gobble up smaller farms, and lead to fewer choices for consumers.”

In a December 2020 tweet, Booker wrote, “These cramped warehouses of livestock are breeding grounds for infectious disease. Ending the cruel practice of factory farming can help prevent future pandemics.”

Most recently in November, the ASPCA has been working towards terminating “ag-ag laws” across the country. These laws silence people who work to reveal animal abuse on industrial farms.

“Ag-gag laws are unconstitutional and have no place in our society,” Freund said. The ASPCA has actively defeated ag-gag bills in more than 20 states by lobbying and organizing on the ground wherever they appear. (Such laws are reminiscent of so-called “veggie libel” laws, which allow farmers and ranchers to sue for damages when news coverage may have damaged the market value of farm products; rarely invoked or challenged, they probably also are unconstitutional.)

Along with fighting whistleblower bills, ASPCA launched its Shop with your Heart Program in 2016. When a consumer “shops with their heart” they are refusing to buy factory-farmed dairy, eggs and meats. Some products can bear terms that indicate meaningful animal welfare standards but actually don’t. The program clears up this confusion by providing label guides, lists of products that have animal welfare certifications such as Animal Welfare Approved, Certified Humane and plant-based products—and where to buy them, according to Freund.

She explained that terms such as “natural” or “free range” sound like they require more humane treatment for animals, but in reality the product can showcase these claims while coming from farms that raise animals in crowded conditions.

The ASPCA was founded in 1866 with the mission “to provide effective means for the prevention of cruelty to animals throughout the United States.” According to the ASPCA website, more than 1500 animals were adopted from the ASPCA Adoption Center and more than a thousand animals were placed with foster families in 2020 during the pandemic.

“While individual consumer action is important, the changes we so desperately need will not be made without collective action,” Freund said.