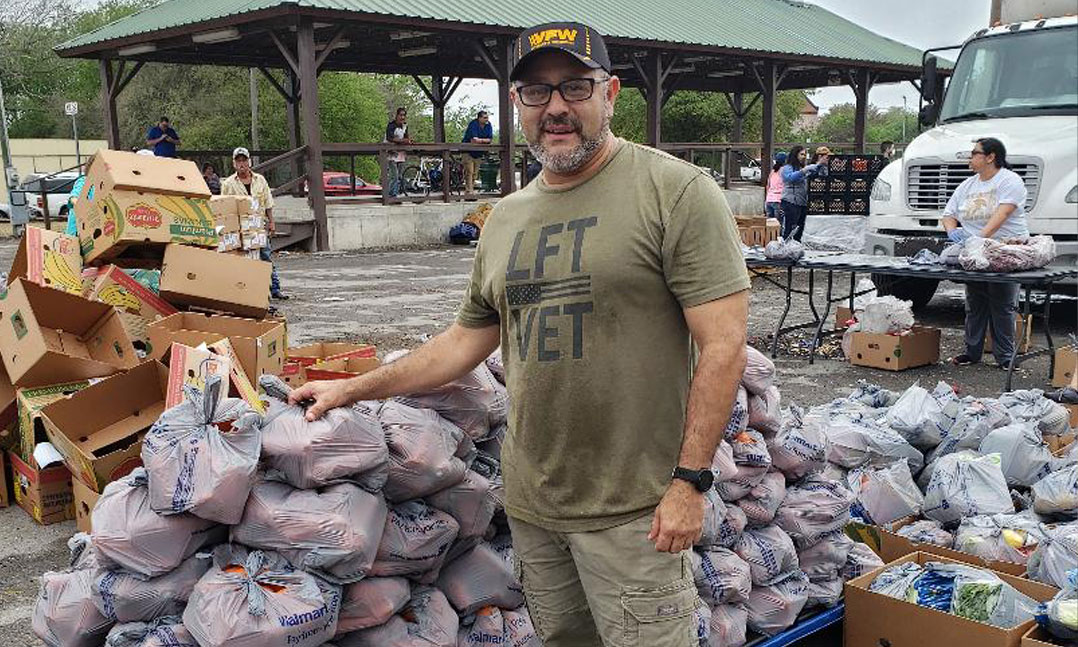 The coronavirus crisis has brought a wave of community kindness, with armies of volunteers—especially veterans—putting up their hands to help those in need in the local communities.

One group of volunteers, members of the nonprofit service organization Veterans of Foreign Wars (VFW), have teamed up with local organizations to assist with food drives for those who need the help the most right now.

Marine Corps veteran Sharman (family name withheld for security) and his platoon of veteran volunteers have been spending a lot time these days assisting projects in Compton, Watts and South Central neighborhoods in Los Angeles. As part of #StillServing campaign, the platoon has helped support distribution of nearly 1,200 food boxes a week over the last few months. They also started growing vegetables at home to contribute to a community sustainment garden. The platoon also currently is renovating the VFW Post 5394 in Compton, according to the VFW’s website.

The #StillServing campaign was launched in January to bring more awareness to the many ways’ veterans continue to serve beyond the military. Randi K. Law, communications manager at VFW’s national headquarters in Kansas City, Mo., said, “A week-long virtual celebration was
held between July 20 and 24 to highlight personal veteran stories that emerged as a result of the campaign. The main aim of the #StillServing campaign was to be bring awareness about the selflessness of our veterans and acknowledge the work they carry out in the local communities.”

VFW’s goal is to provide vital assistance and support for America’s service members, veterans and their families. So another major continuing project is the VFW Buddy Poppy program, through which the organization raised $8 million last year by distributing about 8.7 million “Buddy”® Poppies. The Buddy Poppy program provides compensation to the veterans who assemble the poppies, provides financial assistance in maintaining state and national veterans’ rehabilitation and service programs, and partially supports the VFW National Home For Children.

Effects of the Pandemic
Of course VFW Posts at the local level have been widely affected due to sudden lockdowns. “Some posts” were “adversely affected,” she said, adding “many Posts with halls, canteens, etc., closed these gathering locations due to local mandates enacted as a result of COVID-19.”

But Law said, “we haven’t had any of them close down due to the pandemic.” She said, “Besides our donors, we had corporations come forward and support us.”

“Meanwhile, in some places where there were two posts located in each other’s vicinity, they were either merged or one of them was asked to shut down due to rents going up,” she said. Overall, Law added, “We had to adapt to the changes like any other organization. We are optimistic that we will come out of this stronger than ever. We have found new ways of doing
business and ensure that veterans continue to receive the support they need. Most of our programs are now being conducted virtually.”

Referring to the national organization’s priorities of maintaining and improving the quality of life and benefit programs for service members, veterans and their families, she said, “We are positive that we will meet our objectives this year. The pandemic has certainly changed the way we function, but our lawmakers our changing the way they conduct the business too. The conversation and dialogue will go on and we will continue to provide testimony.”

Declining Membership
The VFW once had 2.1 million members. However, its membership declined over the years. Law pointed out, “Today, less than 1% of the population is serving the country so fewer individuals are shouldering the burden of war.” In addition, the U.S. Department of Veterans Affairs reports that an average of 1,147 World War II veterans, 500 Korean War veterans and 426 Vietnam War veterans are dying each day.

With membership now more than 1.5 million, but down from its 1992 peak of 2.1 million, the VFW’s average member age is between 60 and 65. VFW posts — where members can socialize with other veterans — are rapidly closing across the nation as aging members die and younger veterans choose not to join.

Law explained, “Posts closure is not something new. There has been a steady decline in number of Posts for over a decade now and it’s a direct reflection of having fewer veterans.”
But the VFW still has 6,000 posts, grouped into 52 departments covering the 50 states, the Asia-Pacific area, and Europe. Founded in 1899, the VFW is the nation’s largest and oldest war veterans’ organization, with a national headquarters staff of about 120 employees and a national budget of more than $98 million.

Today, each post has anywhere from 25 to 1,000 members. Many VFW posts have contests for academic scholarships to high school students in need of financial support and engage in other similar humanitarian endeavors. Since 2004, the VFW also has provided $11.9 million in assistance to military families to cover basic needs. It has awarded $7.2 million in scholarships to more than 1,606 veterans and service members since 2014, and recovered $9 billion in disability compensation and pension benefits in fiscal year 2019.

Responding to declining membership
Law said the “VFW staff is coming up with new and innovative ways to target new members using social media. Also, integrated campaigns like #StillServing help us reach new audiences and encourage engagement with our brand. Our members also continue to reach out to the public through community service based initiatives to let them know what we are and what we do.”
VFW members volunteer nearly 9 million hours to community service projects annually, she said.