Many US YMCAs have been partially reinvented by the pandemic 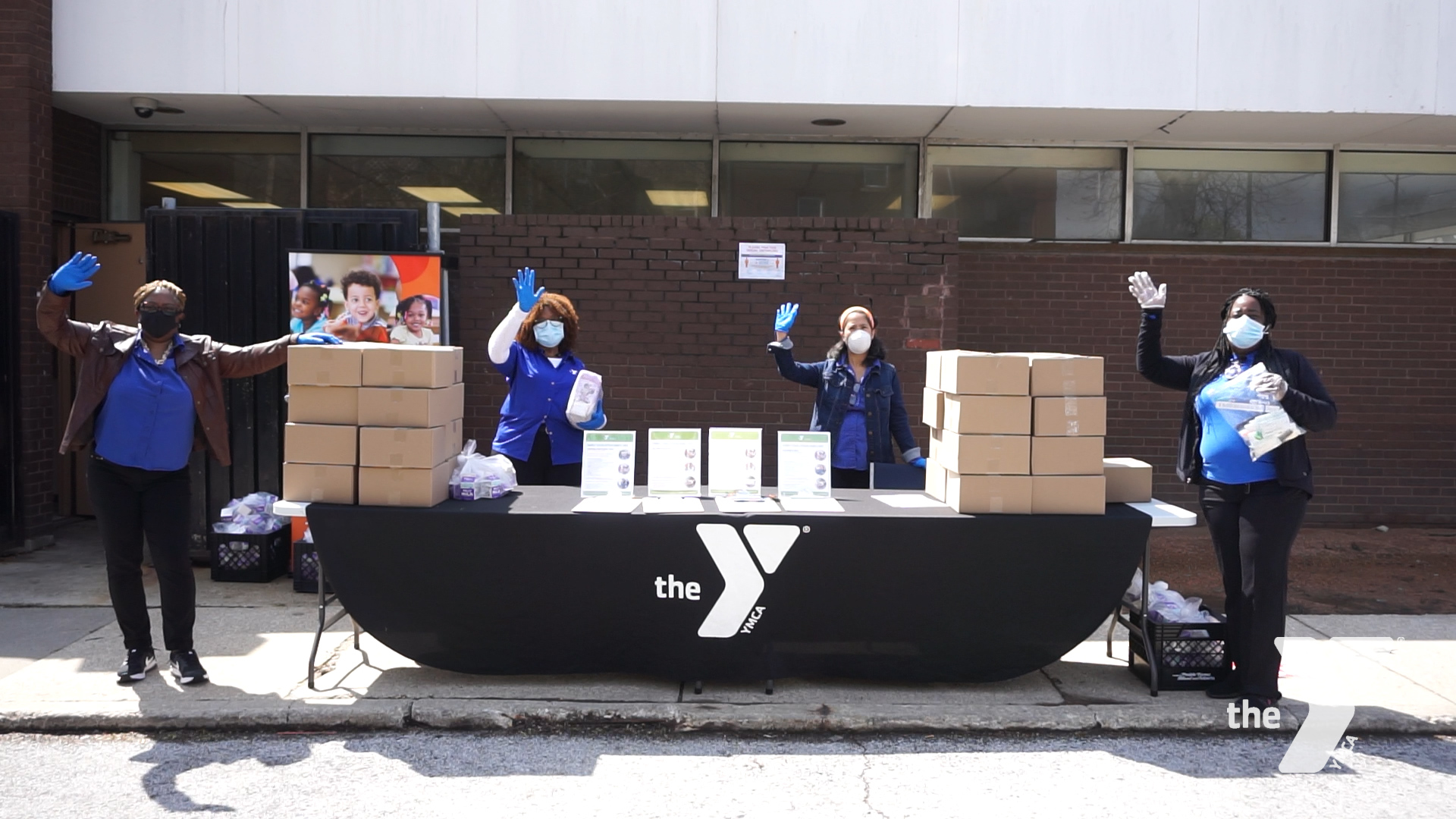 Coming up on a year now that the pandemic has forced widespread closures, and caused humanitarian and economic crises, YMCAs across the United States have taken the opportunity to support their communities in a new way.

Paul McEntire, chief operating officer for YMCA of USA, said that during the course of the pandemic no Y fully ceased operation unless it was permanently closing. If the physical location was closed, other services were still being offered. (However, several YMCAs around the country have merged with another YMCA, and some YMCAs have closed one or more of their branches.)

“Virtually all Y’s actually expanded some of their services, especially in the area of child care and feeding, especially feeding of children,” McEntire said. “And that’s something the Y has gotten much more into in the last five years. But we’ve really expanded that work in COVID.”

According to McEntire, about 1,500 Y’s across the country have partnered with food banks, restaurants, churches and community groups to provide meals.

Stephen Ives, CEO and President of the YMCA of Greater Houston, said that when his Y’s physical locations closed, they redeployed staff into food distribution.

“So, we got very actively involved,” Ives said. “We went from operating a few food pantries to now, at one point, over 20 distribution sites that we were managing…in partnership with the Greater Houston Food Bank and Brighter Bites.”

YMCA of Metropolitan Chicago also worked with other nonprofits to respond to the community’s most urgent needs.

Man-Yee Lee, director of communications for YMCA of Metropolitan Chicago, said that YMCA partnered with new nonprofits to distribute not only food but other essential items. The Metropolitan Chicago YMCA branches offered their spaces for other organizations to use, since the buildings were closed for CDC and state regulations, she said.

“And that’s when the city of Chicago, actually, the mayor came to us,” Lee said. “And when she heard that we had said ‘hey we’ve got space, if any organizations need anything, let us know.’ And the mayor herself called us and said, ‘you know about that, have you ever sheltered the homeless because we’re having a problem with the homeless because…they can’t social distance.’ And we were like ‘oh, we can do that…we’ve got the space.’”

This YMCA also partnered with the American Red Cross to use Y facilities to host blood drives, said Lee.

In Nevada, Mo., the Osage Prairie YMCA has been feeding children through its program for nine years. Its CEO, Jeffrey Snyder, said his organization was well positioned to respond to the crisis that was created due to COVID.

“We haven’t stopped the feeding program as USDA waivers are still in place and currently we’re serving approximately 2,000 kids a week,” Snyder said, whose organization is in a town of only about 8,300 residents. “Or a day really is what it comes down to, but we’re doing it through one pickup time.”

Not only have Ys adapted to their specific communities’ needs for meals but also for childcare. For example, Snyder said that the Osage Prairie YMCA transformed its facility in order to provide emergency childcare while also meeting CDC safety guidelines.

Snyder said, “In the summer, we are normally a day camp so it wasn’t out of the realm of what we could do. It was just out of season for what we normally do and just looked a little differently and obviously with…a lot more urgency than what we would have during a normal seasonal program that we would offer.”

In the Greater Houston Y’s, Ives said that childcare has disrupted normal operations but it is an important community need. Its facilities have provided childcare for essential workers as well as a place for children to do online learning once school started its virtual session.

“When there was so much uncertainty back in April (2020)…we were starting up childcare that initially was only serving essential workers,” McEntire said. “That’s why we hired (an) outside group to learn all the things to be certain we were being as safe as possible.”

In April of 2020, YMCA of USA hired the consulting company Environmental Health and Engineers to provide a “Field Guide” for resident camps. This help then advanced into assistance in writing guidelines for safe operations in all facility activities.

“So what we ended up doing was providing then a whole lot of follow-up trainings on all of that and then regular webinars that were significantly Q&A time so we developed a lot of papers in expertise,” McEntire said. “And so instead of every Y having to do all that work themselves we did that and then through different vehicles communicated that and make that available to them.”

The US currently has 795 YMCA corporate entities with more than 2,500 YMCA branches among them. YMCA of USA provides resources and coordination for those entities and branches, said McEntire. Y-USA oversees each YMCA to make sure that it is meeting its membership standards.

“Really the biggest thing is creating the network of Y’s across the country…to have that platform that we all can communicate together on and through and so forth,” Snyder said. “And that’s something that the Y-USA really kind of keeps for us and manages that piece of it.”

Snyder said that having Y-USA’s help has been key for his small YMCA, where he is currently the only full-time staff member. Larger YMCAs located in metropolitan areas are able to have larger budgets, with larger sources of funding. With the help of Y-USA, small Ys can still have the same marketing and hire similar resources even though the income is lower.

“One won’t get reopened for sure,” Ives said. “The other five are under consideration… and the board will be making final decisions on those in March or April. So we’ve been careful and deliberate about which centers we are able to open.”

These considerations include the facility’s ability to hold people while socially distanced and the volume of activity prior to the pandemic, according to Ives.

McEntire said that four or five local Y corporations have permanently closed because of COVID closures. “It’s an ongoing concern, but part of what we’re doing and then they’re doing with their local boards and volunteers is everything they can to get resources.”

Individual YMCAs situations vary significantly. Some YMCAs continued construction or planning for new facilities throughout the pandemic because capital project funds already were raised and committed separately from operating funds.

For example, Winona Family YMCA in Winona, Minn., started construction on its new building in May of 2020 according to its website. In Bloomington, Illinois, the Bloomington-Normal YMCA held a groundbreaking ceremony on Sept. 22, 2020 for its $23 million building. KWQC reported that the new R. Richard Bittner YMCA in downtown Davenport, Iowa, opened its $24 million facility on Dec. 21, 2020.

Out of the 795 corporate Y entities, more than 600 received Paycheck Protection Program (PPP) funding. According to the U.S. Small Business Administration website, this program provides loans for businesses to “keep their workforce employed during the Coronavirus (COVID-19) crisis.”

The biggest challenge with PPP funding, McEntire said, was the restriction of being an organization with less than 500 employees. McEntire said that eliminated at least 75 of the top Ys.

Lee said, “In terms of assistance or financial assistance from the federal government, we have received next to nothing. We were considered..too large for the Payroll Protection Program…and any of the other grants or stimulus that they offered.”

“We want to continue doing all this great work,” Lee said. “You know, let’s face it, we don’t have an endless supply of money funds and we need that. We need the federal government to start thinking about how they can help us continue helping our families.”

McEntire said that the YMCA of the USA has worked with other nonprofit organizations to get more funding for YMCAs, as they turn to both donors and government funding—in addition to memberships.

“Virtually all Y’s are doing much better at least in 2020 in their fundraising,” McEntire said. “Local donors and communities and foundations and even government…in many many cases have been extremely generous especially when they realized the sort of essential type work we were doing of feeding children and providing childcare so parents could work and, and then really even in some ways I would say taking on the role of schools in some communities when the schools were either out or are doing every-thing virtually. The financial support of donors has been tremendous.”

Snyder said that his YMCA received immediate funding from donors, “$5,000 here, $10,000 there” to continue its food programs.

“The philanthropic community, we found, has stepped up for us when we just do the right thing,” Ives said. “So our approach was do the right thing because it’s what’s needed and we have people and we have buildings that we can put into use, particularly for the alternative school age, all-day care for essential workers, as well as food distribution, as well as some meals.

Ives explained, “we’re finding every place that we can work and in each incidence there was either a contract that got signed by the county that helped fund that to another partner or philanthropic support people just sort of cheered us on with their dollars.”

Snyder said YMCAs have been able to redefine themselves and what they are capable of providing to communities, including childcare and feeding children, and people are going to continue to look to Y’s for expanded services.

Ives said, “In the future when the buildings are gone, but people are members because it’s the Y. Not just because it’s a building that they get to go take programs (at). And I think that is going to be a major shift for us, and it’s not an easy lift to move a 135-year-old organization down a path of reimagining itself, but that is certainly what we are up to and will continue to be up to in the months ahead.”