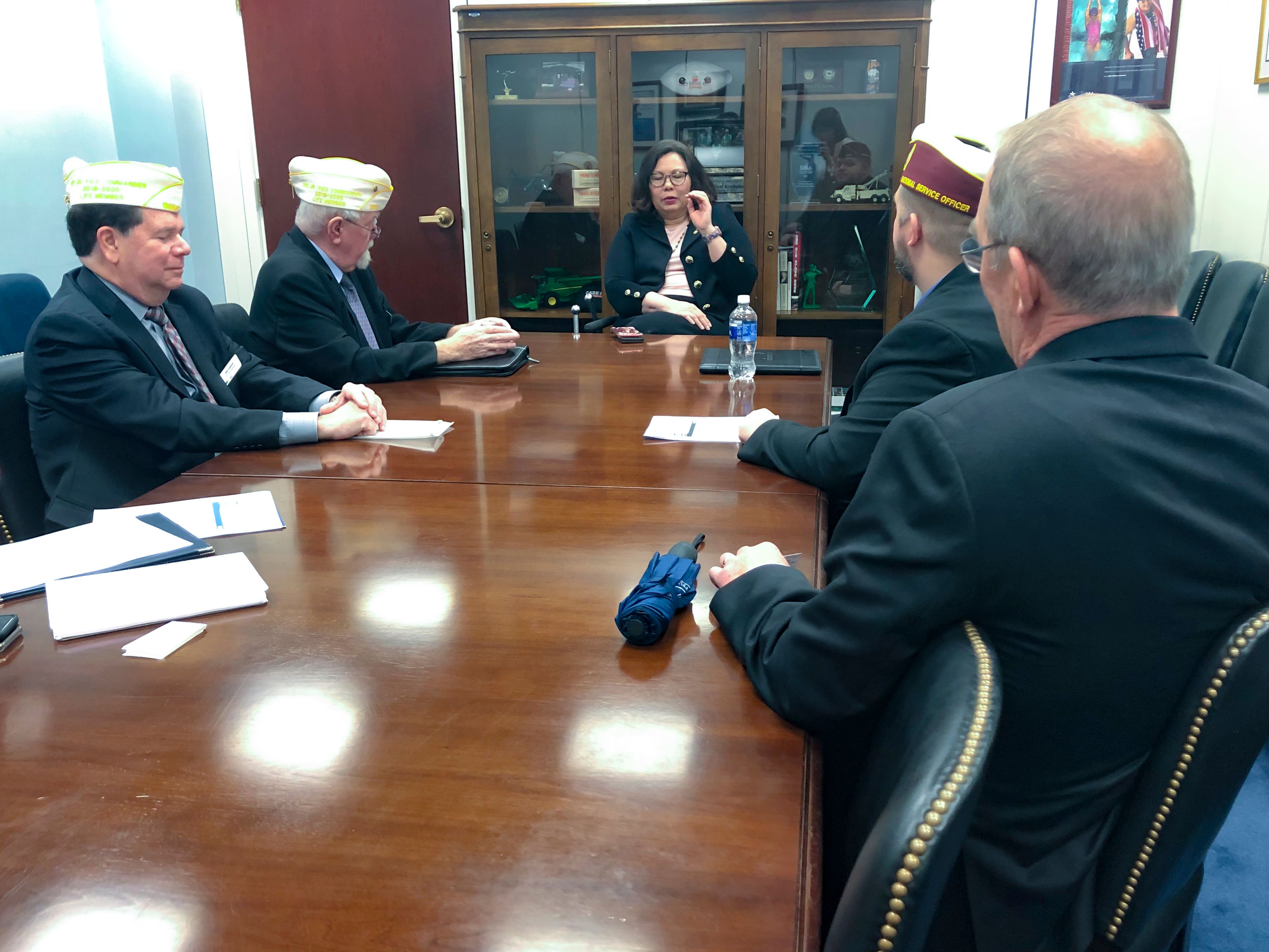 Standing atop Capitol Hill, testifying before the United States Congress, Joy Ilem speaks with the weight of a quarter of America’s disabled veterans behind her. She serves as National Legislative Director of the Congressionally chartered nonprofit lobby group, Disabled American Veterans. She speaks, not for them, but with them, giving a voice to her members’ words.

DAV maintains a uniquely ground-up advocacy mission. The organization’s policy goals are based directly on those submitted by local members and departments across the country.

It has been supporting and advocating for injured and ill service-disabled veterans for 100 years. Founded in 1920 after World War I, the nonprofit now serves more than 1 million veterans each year, offering benefits, transportation, advocacy, employment and voluntarism.

Through its century of service, DAV has developed its grassroots advocacy model rooted in the idea that no one knows about the issues facing disabled veterans better than the veterans themselves. All legislation the nonprofit publicly approves, disapproves or champions comes from resolutions submitted at the local level.

Al Labelle, 15-year member of the organization and now legislative team member, said resolutions usually don’t start as fully-formed legal documents. Rather, they take the first step when a veteran stands up and speaks up.

“I’ll have members come up to me and say, ‘Hey, how come we don’t have a position on such-and-such.’ And I’ll say, ‘Because nobody submitted a resolution!’” he said.

In order for a mere idea wondered aloud at a local DAV meeting to eventually be included in the organization’s national legislative program, and eventually — maybe — become a bill or law, it must undergo a complex process.

Six-year-DAV-member, U.S. Navy veteran Robert Hilliard, and his story of submitting a resolution serves as an illustrative example of this process. To Hilliard, the grassroots advocacy system is integral to the organization.

At the 2017 summer state convention, he sat watching a fellow member of the Wisconsin department “hijack” the 2017 summer state convention without following the official process of moving legislation. His fellow DAV member was trying to pass a cannabis resolution to the nonprofit’s legislative platform, but circumvented the established steps to move a resolution forward.

Hilliard said he couldn’t help but think, “this isn’t the proper way.”

Most resolutions start off at the chapter level in one of DAV’s 1300+ local chapters. Members can present an idea to a committee who reviews it and recommends how the chapter body votes.

Hilliard felt that any resolution made about cannabis should follow the predetermined procedure, starting at a local chapter. “When you do things the right way you’re more apt to be listened to than when you hijack things and scream and don’t do them in the proper manner,” he said.

So, the Navy veteran got to work writing his own cannabis resolution. His focus was on presenting a clean image of DAV — making it palatable to Congress on both sides of the aisle — while also helping as much of the membership as possible. He presented the resulting document to his local DAV chapter, Chapter 27, which represents Wisconsin’s Monroe and Jackson
counties.

Hilliard’s background with other nonprofits proved helpful in writing the resolution. However, for veterans without this experience, DAV provides a number of resources to make the process more accessible.

Members can find legislative webinars and documents on turning their ideas into action on the organization’s website. Additionally, Benefits Protection Team Leaders (BPTL) volunteer their time to grassroots advocacy.

There is a BPTL for every state, some in certain chapters. These individuals are volunteers who understand the lobbying process and serve as a bridge between members and lawmakers. In addition to helping veterans draft resolutions, BPTLs supplement the work the national legislative staff are doing on Capitol Hill. They testify for state bills and develop relationships
with senators and representatives to ask for their support on congressional bills.

Labelle, BPTL for the Wisconsin department of DAV, remembers when Hilliard’s cannabis resolution passed through Chapter 27 and moved on to the state level in Wisconsin.

“There was one that, how should I say this, was an interesting debate,” he said. “There were people who wanted it but didn’t quite understand that we can’t advocate that marijuana be legal; that’s not who we are, it’s outside our scope. However, we can advocate that comprehensive studies be done to ensure that there will be studies on efficacy for veterans, specifically disabled veterans.”

Once resolutions are presented to their respective state-level DAV department, the department considers the ideas at a convention. Departments may write their own resolutions as well, but according to Labelle, most come from membership.

A state committee considers the chapter-approved and department-written documents and votes on which to recommend to the body of the convention. After the committee makes its recommendations, the convention body votes to adopt or move a resolution forward in the process.

Hilliard attended the Wisconsin department convention in June 2018 to testify for his rewritten form of the medical marijuana resolution. “When I spoke about it on the floor, probably 99% of the floor — once they heard me speak about it and why I was doing it — were supportive of it,” he said.

Any local or state-level resolutions adopted by the convention stay within the department, such as advocacy for laws around hunting and fishing permits which fall under state legislation. Resolutions that address federal law, however, move forward in the process to be considered at the annual national convention.

National conventions occur once a year, usually during the summer. Any resolutions approved there are incorporated into that year’s official legislative agenda.

The 2020 national convention was originally scheduled for July 31 to August 4 in Dallas, Texas, but was canceled due to the COVID-19 pandemic. This is the second time in the organization’s history that the convention has been canceled, the first being in 1942 as the U.S. increased involvement in World War II.

DAV will be hosting a digital event this year to celebrate its volunteers and leaders, as well as to deliver important information. 2021’s DAV and Auxiliary National Convention is set to be in Reno, Nevada.

In previous years, active members have arrived to the convention as delegates to be placed on one of five committees to assess resolutions. In the usual convention process, each committee is advised by one or two staff members of the national legislative team. After committees have made their recommendations — similar to chapter and state conventions — the body votes on what to approve.

Resolutions don’t automatically renew from year to year, so to be included in the following years program, they have to be submitted again.

Last year, DAV received 346 resolutions from 33 states, with 191 being adopted.

Hilliard’s proposal to have federally funded research into medical marijuana as treatment for PTSD was slightly modified and adopted at the 2019 national convention. It became Resolution No. 076 Support Department Of Veterans Affairs Research Into The Medical Efficacy Of Cannabis For Service-Connected Disabled Veterans.

“They took most of mine and adopted it but adapted it,” Hilliard said. “When a resolution gets brought to Congress it needs to be in a more broad form, because if it is brought too specifically and worded too specifically, it usually gets thrown out and if it gets adapted you’ve pigeon-holed yourself. So, they wrote it in more broad terms, but, for the most part, 100% of mine was used.”

Resolution No. 076 states, “THEREFORE, BE IT RESOLVED that DAV in National Convention assembled in Orlando, Florida, August 3-6, 2019, supports more comprehensive and scientifically rigorous research by the VA into the therapeutic benefits and risks of cannabis and cannabis-derived products as a possible treatment for service-connected disabled veterans.”

Labelle said there were many drafts of this controversial resolution before it got approved. He thinks more research should be done, given his background in respiratory therapy, but also believes it has the potential to help a lot of people.

Once adopted from convention, resolutions incorporated into the legislative program serve to direct the national team’s efforts in Congress all year. “[The legislative program] guides our policy decisions that we make and put forth for our recommendation within testimony. So, for us it’s a very important piece, the cornerstone of what our members are telling us they would like to focus on during the legislative year,” Ilem said.

Ilem and the rest of her office put together legislative priorities for the year. Some critical priority goals for 2019 were advocating for women veterans, introducing a compensation package for disabled veterans who are survivors when their loved one dies, and addressing toxic exposure issues. Bills are usually a combination of multiple resolutions.

“We keep track throughout the year of which resolutions are included into legislation that has been introduced,” Ilem said. “That’s part of our job on the legislative team, to go up to Congress and say, ‘This is really important, it came from a resolution.’”

“There are a lot of veterans asking for this,” Hilliard said. “Even if it only helps one veteran, then it’s one veteran helped. So long as one brother or sister is not left behind and they find help from another avenue, and the efficacy is solid then it is worthwhile — the wait and everything was worthwhile.”

When a bill is introduced into the House of Representatives or the Senate, DAV’s ground-up approach isn’t over. It relies on its BPTL volunteers to push forward federal legislation.

Labelle recalled a moment when he, as the Wisconsin BPTL, was directly involved in passing\ national legislation that affected DAV.

During the 2008 presidential campaign, both Senator John McCain and Senator Barack Obama said they would support advanced appropriation of the Department of Veterans Affairs if they were elected. Advanced appropriation meant the budget would be done one year in advance, so the VA wouldn’t be affected by government shutdowns.

When Obama was elected he called a press conference on veteran’s issues to publicly support the issue. However, the chairman of the House Appropriations Committee, Rep. Dave Obey, wasn’t in favor. Luckily for Labelle, who felt strongly about the importance of advanced appropriation, Obey attended the same recreation center.

Having found common ground, Labelle had many long conversations with Obey. One day, out of the blue, the BPTL got a call from his office, which told Labelle that the representative would be on Wisconsin Public Radio that night, and asked him to call in to the 6 o’clock show. The radio host was interviewing Obey, asking what to expect with the following year’s budget when they took the call from Labelle.

“I thanked Dave for being willing to listen and asked what to expect in the new budget, and he said, ‘Well, we’re going to try something new this year. We’re going to do advanced appropriation,’” Labelle said. “I dropped the phone; I immediately called [DAV National Headquarters] and low and behold, I would say within the matter of a few months it passed.”

The Wisconsin BPTL said it was one of his proudest moments because he was directly involved in the process of approving legislation that helped veterans around the country. “We always tell our membership that at the local level that local connection you have with your member of Congress, and that meeting is what it takes to push it over the edge,” he said.

DAV also has a program called the Commander’s Action Network. Thousands of people across the U.S. are signed up for Commander Action Alerts, which notify them when a bill is introduced that DAV has a resolution on. The organization declares its position on the bill and asks members to act by sending either a pre-written letter, or their own personalized note, to their members of Congress saying why it is an important piece of legislation to disabled veterans.

Labelle claims the trademark he is now known for is, “Advocacy is not a spectator sport.”

This sentiment seems to pervade every level of DAV. Legislation and advocacy are rooted in the ideas and voices of local members. “We count on our members to do that grassroots advocacy,” Ilem said. “That’s how we get things done.”