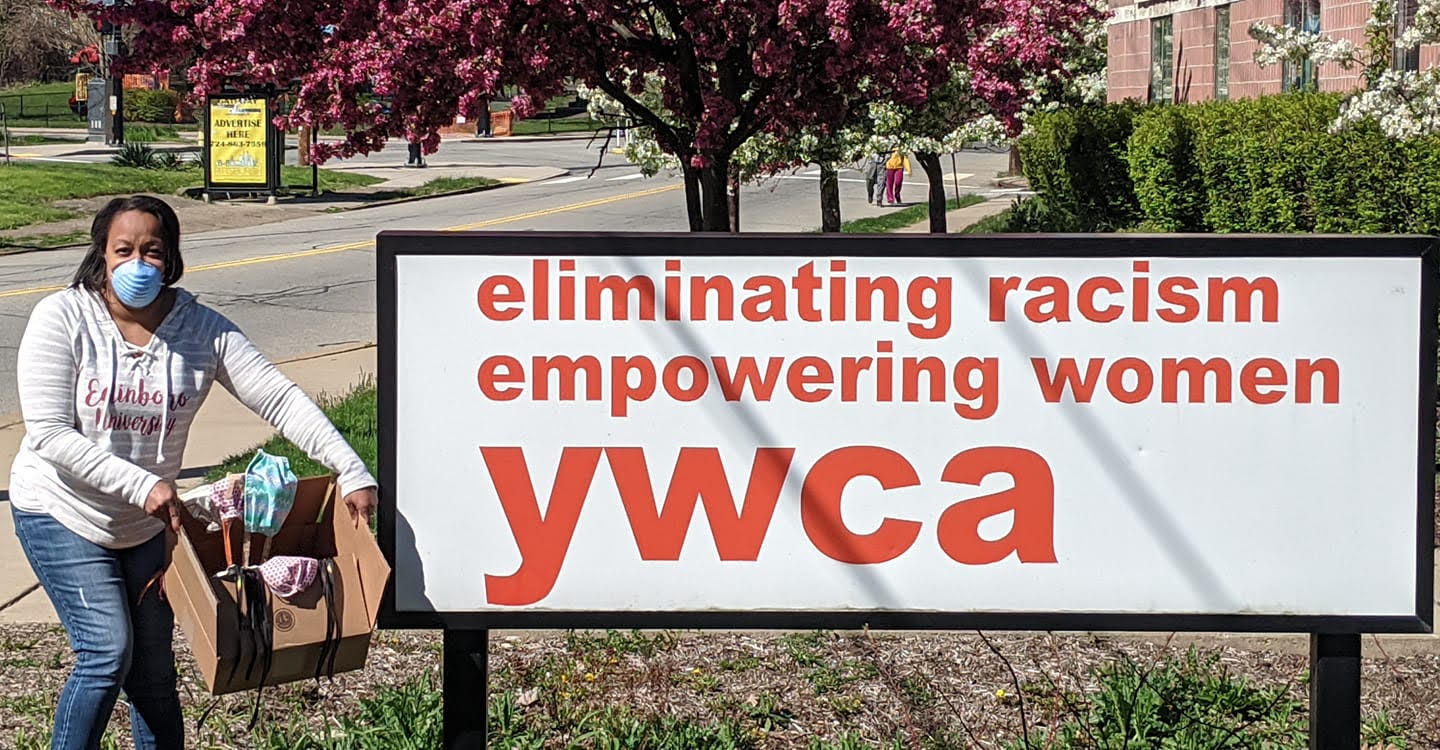 PITTSBURGH — As injustices faced by people of color in the United States have recently been elevated through the spread of the coronavirus and police brutality towards Black people, YWCA USA and YWCA Greater Pittsburgh have continued their efforts to elimination of racism through education, partnerships, and advocacy work.

Annually, YWCA USA runs its Stand Against Racism campaign in April as a way to carry out its mission of eliminating racism and empowering women.

The Stand Against Racism campaign started “many years ago” through YWCA USA and has been adopted by many YWCA branches, said Barbara Johnson, senior director of the Race and Gender Equity Center for YWCA Greater Pittsburgh. Angela Reynolds, CEO of YWCA Greater Pittsburgh, said the YWCA’s racial justice work primarily is based in the Center for Race and Gender Equity.

Johnson described Stand Against Racism as an “awareness campaign” that began as an attempt to raise awareness about racism in New Jersey. YWCA USA’s website says Stand Against Racism “is a signature campaign of YWCA USA to raise awareness about the negative impact of institutional and structural racism in our communities and to build community among
those who work for racial justice.”

“The YWCA’s branches use that as a way to connect with each other nationally during the same week,” Johnson said. “Every single YWCA has a different way that that looks.” Johnson said YWCA Greater Pittsburgh has made an “intentional decision to focus our work more on educational opportunities.”

She said Stand Against Racism began as people protesting outside. “As we move forward, and as we have moved forward as a YWCA in Pittsburgh, we are completely aware of the fact that racism exists. We don’t need to create any awareness,” Johnson said.

She said the 2019 national theme for Stand Against Racism was “immigrant justice is racial justice.” YWCA Greater Pittsburgh held events such as panels featuring “local professionals who were serving immigrant communities,” Johnson noted.

“It was a way for them to be able to share what’s really happening live in Pittsburgh, and also be able to help people understand the language better, so when they see these things listed in newspapers, or hear them on the radio, they’re more aware of how they can single out specifically what’s happening,” she explained.

The national and Pittsburgh theme for Stand Against Racism 2020 was focused on “Why Women Vote.” Johnson said YWCA USA curated “this amazing panel of women leaders from all sectors of life” to discuss racial issues in the United States and the importance of voting. (This year is the 100th anniversary of all U.S. women gaining the right to vote through
ratification of the Constitution’s 19th Amendment; women already could vote in presidential elections, if not all elections, in 27 of the then 48 states by the 19th Amendment’s ratification.)

Due to the coronavirus pandemic, YWCA Greater Pittsburgh decided to promote the same theme as YWCA USA to give people in the greater Pittsburgh area the opportunity to view the event on Zoom, Johnson said. “It would definitely be a miss for us to not point out all of those amazing partners that our USA organization had,” she pointed out.

Johnson said that in her less than two years at YWCA Greater Pittsburgh, the Stand Against Racism events have been “transforming the Stand to be more not awareness anymore, but really another piece of the work that we do.”

“We do want to stay connected to [YWCA USA], but we also want to be very connected to focusing our educational efforts and impact on the community of the greater Pittsburgh area,” Johnson said.

She said YWCA Greater Pittsburgh relates its work to the region and partnering with YWCA branches in other regions. If YWCA USA has a callout to address voting, local YWCA branches nationwide also need to look at how their region is addressing elections and voting, Reynolds said.

“[Johnson] and her time were very instrumental in making sure that we were getting out the message in terms of mail-in ballots,” Reynolds said. “As we deal with the pandemic, we thought it was very important that every voice was heard so that people had access to being able to cast their vote.”

Reynolds said YWCA Greater Pittsburgh is currently partnering with Pittsburgh broadcaster WQED, which operates both a PBS television station and a public radio station, to mark the 19th anniversary’s 100th anniversary. She said they are specifically looking at how not all women were initially given the right to vote in 1920 and how this “relates to
race and being able to celebrate the successes that have happened in the African American community, celebrate what’s happening with women, while also recognizing that there is that disparity.”

Johnson said YWCA Greater Pittsburgh has recently been working with local partners to complete “any and all” work remotely relating to the theme of “Why Women Vote.” The 2020 Census is also a large element of the theme, she said.

YWCA Greater Pittsburgh has released media statements and advertisements to smaller newspapers “that target communities who might be least likely to be counted in census efforts or make their voice be heard,” Johnson said.

Moreover, Johnson said educational training has also recently been accompanied by work with Pittsburgh-based PNC Bank’s legal team to educate office workers about racial justice issues affecting their peers. She said it was an “ongoing, yearlong effort where there were sustained conversations and discussions about race.”

“My hope — in terms of where we move forward — is to think about how we can really make an impact in those corporate settings, or nonprofit settings, or agencies across the Greater Pittsburgh area, in ways that help them to address and eliminate racism even within the context of their institutions, but also with people who work there so they can take that out into their communities,” Johnson said.

“What is key is to make sure that as we go through all of our programming is being done through this lens of reducing gender and racial disparities, but then also being more proactive as we relate to empowering women and making sure that we’re achieving racial justice,” she said.

Reynolds said she started as CEO right before the coronavirus’s spread began to affect the United States in February 2020. The YWCA’s strategic plan for the year was already in place before the pandemic and the initiative to “be more proactive as it related to eliminating racism.”

Reynolds, an African-American, said her selection as CEO was part of the strategic plan. An April Pittsburgh YWCA press release said, “[Reynolds] joins YWCA at a time when existing racial disparities are magnified by the crisis, and recovery planning is critical for the well-being of Pittsburgh’s underserved populations.”

As the spread of the coronavirus has disproportionately affected Black and brown communities as well as recently increased media attention to police brutality toward Black people, Reynolds said YWCA Greater Pittsburgh has continued remote work to look at “this deeply rooted racist system that allows these disparities to exist.”

Johnson explained, “[The Center for Race and Gender Equity’s goal] moving forward is to really think about eliminating racism, not only how we face externally to the Greater Pittsburgh community, but also internally how all of our departments are collectively lifting up race and gender inequities in all of what we do so we are all speaking the same language.”

Ginny Giles, the YWCA Greater Pittsburgh’s interim vice-president of resource development, pointed out that the Center for Race and Gender Equity is one of the organization’s four departments, with the other three “providing direct services to meet community needs.” Those other three departments, among other tasks, gather information about the community needs and gives the Center “first-hand perspective” about the impact of various policies and needed changes.

“Our advocacy efforts are really rooted in direct connections and service to the community,” Giles said.

Johnson said, “It really is about committing yourself to learn long term. It’s not a one-hour workshop and everybody’s good. I think that this pandemic has lifted up all of the racial issues that existed way before the pandemic happened, but lifted them up in a way that makes people really, really see all the disparities that existed beforehand. Those are only going to be layered more strongly post-COVID-19.”

Additionally, Giles said the way advocacy and equity work looks may have changed throughout the history of YWCA, but YWCA Greater Pittsburgh is “really serious” about its mission statement.

“We are in this for the long haul,” Giles said. “We have been here for 150 years, and we’re going to keep being here.” And she said YWCA Greater Pittsburgh wants to continue to collaborate, rather than compete, with other partners.

Johnson added, “We as a YWCA are positioning ourselves to really be one of the main players in making sure that all of those voices of the people who have been voiceless are heard as we plan the Pittsburgh of the future.”